As usual, I want to give everyone a look at what Dungeon World looks like, sales-wise. The idea here is to share what it looks like to be a large-ish indie game publisher. (Are we large-ish? I think so, given what I know of others. If we had a larger catalogue that sold even partially as well as DW we certainly would be.)

This was DW’s big year. 2012 was all about getting the Kickstarter out the door. We started selling PDFs in Q4 2012, shipped backer copies in Q1 2013, and had our first few hard copies sold in Q1 ‘13. From there we messed around with a number of channels: lugging books to conventions ourselves (PAX East, never again), Amazon, Indie Press Revolution, DriveThru, Alliance. We eventually settled into primarily IPR, DriveThru, and Alliance. They all have ups and downs—DriveThru is incredibly simple, but since we want to print our own books they’re PDF-only. The folks at IPR are great, and do a great job of print+PDF, but are slightly more work. Alliance is by far the most work, with real invoices and junk, but they may be the most direct line into “big” game shops.

Where does that leave us? Doing quite well, actually. For the numbers below I have not included the 1,391 Bundles of Holding sold that included Dungeon World. We got a decent chunk of cash from that, but we’re less concerned with cash than getting games to people. This also does no include anything from the Kickstarter, or from Dungeon World Basic. 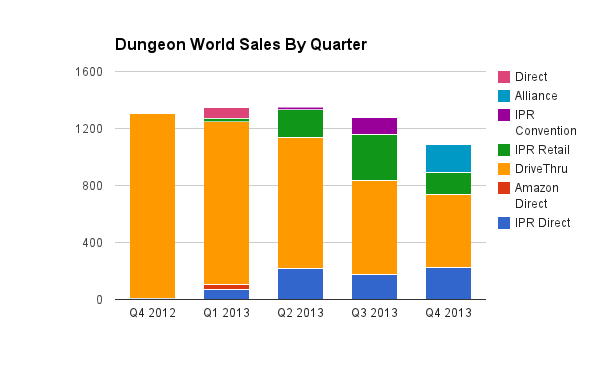 To make it easier on anyone who’s seen Vincent Baker’s similar report, here’s Dungeon World’s direct sales, same as Vincent reports. This is basically the above chart, minus retail and convention sales. 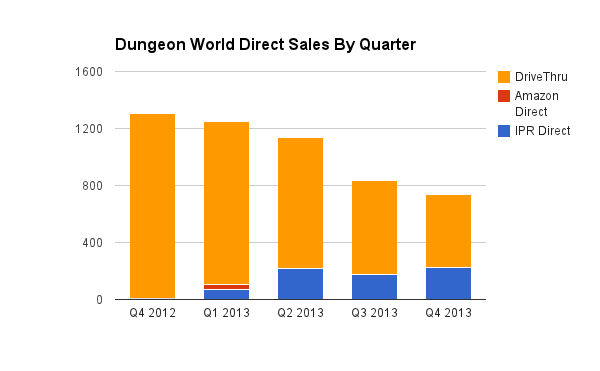 These are all sales that are as close to direct as possible—no bundles, no conventions, just folks buying the game in PDF or print from IPR, DriveThru, or Amazon. Since we couldn’t keep up with selling directly ourselves we don’t have any “direct” sales like Vincent has, but these are effectively as direct as it gets: we send these people books (or files), they sell them and then give us money.

As you can see, Dungeon World’s slowly slacked in sales, but is still (by what I know of typical sales) a huge seller. This is the point where my/our game publishing gets interesting as we transition (or not) from selling our One Big Game to having a catalogue. If this trend continues I’d expect to keep moving hundreds of copies of DW (mostly digitally) per quarter for the foreseeable future, but the only way to get upward motion is to either have DW hit another level or build a catalogue of products. Given the progress of the war supplement, Black Stars Rise, and a few other ideas, I think we’re likely to see an upward trend to some point in 2014.

Sage LaTorra is a game designer and senior test engineer at Google. You may know him from Dungeon World.